Thandi, the lone survivor of three rhinos targeted by poachers on the night of March 2, 2012 in Kariega Game Reserve, was our inspiration for World Rhino Day, which happened on September 22. We contacted Kariega and offered to assist by generating funds for their Save the Rhino Foundation. To raise funds, we held a raffle for our parents and learners, which involved selling tickets. The winner received a really cute rhino soft toy!

The Save the Rhino Foundation’s major goal is to raise enough money to maintain its Anti-Poaching Unit (APU) fully operating, ensuring that Thandi, her family, and the other rhinos at Kariega are safe. This accomplishment would not have been achieved without our parents’ help. Curro Sitari were able to raise a significant sum of money, which will be donated to their foundation. Kariega is thankful for our initiative, and we’re thrilled that we were able to help Thandi, her family, and the rest of the animals in Kariega Game Reserve. ‘Don’t let the Rhinos become like Dinos’ 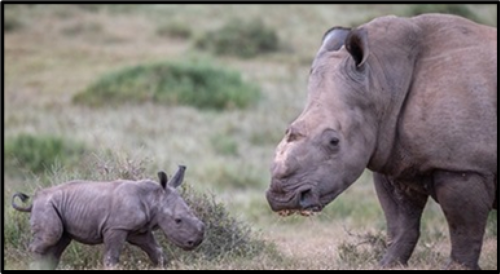 Thandi and her calf