She is the middle child of three children and the only girl.

She has always had an amazing upbringing being surrounded by her loving and supportive family.

Asanda started her schooling in Kriel and later moved to eMalahleni. 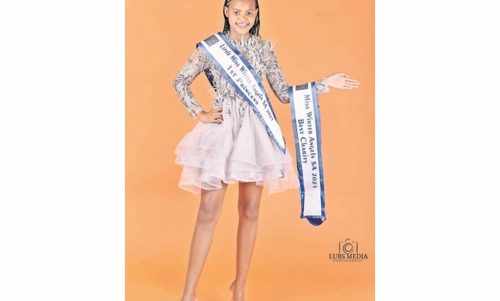 She attends school at Curro Bankenveld where she is actively involved in sporting activities such as running which is her favourite; she is also a member of the arts and choir club and she also does ballet in her spare time after school.

She is academically inclined and is always amongst the best students since she started school.

At the beginning of the year, she decided to join modelling for her extramural activities and she joined Masebotsana Modeling Academy.

“She has learned so much about modelling including walking gracefully in heels and being confident herself. On September 4, she decided to put her learned skills to the test and she entered a pageant called Miss Winter Angels South Africa which took place in Gauteng. She was very nervous but excited about the new opportunity. Her dedication to succeed paid off when she received two titles namely Miss Winter Angels 2021 first princess and Best Charity,” said her coach, Wandile Litheko.

Asanda would like to thank ‘Amyoli’ a local designer who designed her dress, her pageant coach and most importantly her parents for their support.

“I am excited and hopeful for my future both academically and in pageantry,’ Asanda concluded.