IN THE face of Covid-19 challenges that limited access to learning materials, Namibian teenagers who participated in the recent World Schools Debate competition held in China scooped the country's first international debate accolades.

The event took place from 26 July to 4 August 2021 and the Namibian team comprised five pupils led by captain Christiaan Prinsloo (18) and Anesu Mushonga (17), both from Windhoek High School.

The coaches were Ivan Limbo and Clinton Muinjo while Edward Shati was the team's secretary.

He expressed happiness with the team's performance: “Having speakers that come first and second globally is a huge achievement.

“Our debate circuit faced many challenges but our speakers still managed to come up tops,” he added.

Shati urged more stakeholders to support the national debate team through funding: “This is the second time Namibia is participating in the competition virtually due to challenges posed by the Covid-19 pandemic.

“As a team we faced many challenges, prior and throughout the tournament. Covid-19 negatively affected the Namibian debating circuit to a large extent, as the protocols meant that we were unable to participate in local tournaments or train in person as we usually did. This hindered our preparations,” he added.

Participant Nanghonda said the experience taught him a lot about philosophy, morality and ethics.

“What I learnt is that competing against such brilliant minds has only helped me to understand the greater levels of debate that I need to reach,” he said.

Nanghonda added that the presence of many scholars with good understanding of complex concepts was mesmerising.

“Apart from that, being able to represent my country was an honour, working with speakers from different schools helped me become more cooperative,” he said.

Nanghonda added that he is grateful for the opportunity.

Hatutale said taking part in the competition was a wonderful learning experience and it was an amazing opportunity to have been exposed to different strategies from around the world.

“It was great to have experienced the standard of debating in other countries and I learnt how we can implement that in our country,” he said. 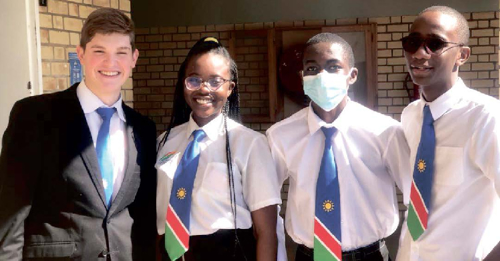