Curro Waterfall’s Grade 9 learner Daksh Singh was recently awarded for his excellent work in computer programming by Byju’s FutureSchool after enrolling in their WhitehatJr programme. 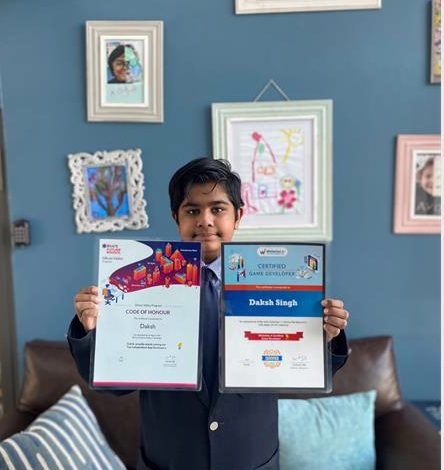 Daksh Singh with his two awards in computer programming

According to the school’s website, Byju’s FutureSchool introduces children from six to 18 years old into the coding world were they can learn the fundamentals of coding-logic, structure, sequence and algorithmic thinking to generate creative outcomes such as animations
and apps.

The 15-year-old participated in two international competitions which highlighted his great ability to programme. His first award was for becoming a certified game developer with UI (User Interface) and UE (User Experience).

This took him one and a half years to complete, and the second certificate was a ‘code of honour’ which he received for being in the top 1% of the school’s coding classes.
In this programme, the top learners can win a trip to Silicon Valley in the US to meet the top scientists, engineers, venture capitals and entrepreneurs.

Camilla Pretorius, head of high school at Curro Waterfall commended Singh for his hard work and completing the programme quicker than his peers.

“We hope that Daksh will be part of this team to take a trip to California, USA,” Pretorius added.
Singh also shared his plans for the future. “After college I want to go into the robotic AI [Artificial Intelligence)] field.”