Two students and one maths teacher from Curro New Road in Midrand, have outperformed peers across the country. They are among the #1MillionMaths Schools League Champs. The annual maths and science competition is run by Siyavula, sponsored by MTN and UNICEFrun the annual competition. They challenge all high school learners to complete at least one million maths and science questions on the #1MillionMaths online platform. They have a view to assist them in preparing for their final year exams and their futures. Learners need to complete 10 questions to earn a minimum of 250 atoms (points) to be eligible to win.

Celine Harripersad came 2nd in the Grade 8 competition. Ntando Simelane was awarded third place among the Grade 9s. Their teacher, Mr Ncedo Maseko, entered his classes into the competition. He received top honours by being named as the Grade 8 and 9 Maths Champion teacher for 2021. He achieved the greatest average level of mastery for all learners in the two grades.

Mr Maseko’s approach to the competition was, “to encourage our learners that getting the sums wrong is fine, it’s all part of the learning journey. But then they needed to practice and repeat the sums until they were mastered. Each learners’ assignment had to be above 90%.” 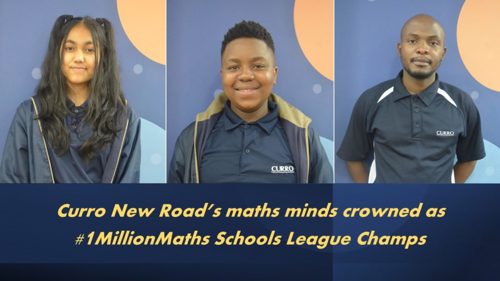 Maths and science are widely recognised as subjects that open doors for matric students and the #1MillionMaths Challenge highlights the importance of these subjects. Schools competed against each other for the chance to be crowned South Africa’s 2021 Maths or Science School Champions. Learners could also opt in to compete in the competition individually, and any learner who achieved 100% mastery by the end of the competition was invited to enter the final showdown. To achieve 100% mastery is not easy and means the learner has mastered everything in the curriculum for the year.

“Maths and Science are cornerstones to many career options and performing well in these two subjects puts learners in good stead for their future. Grit and perseverance are key to success in both subjects and both Celine and Ntando have showed their skill through this competition. Learners who get to the top of the leader board are those who have worked through the curriculum, mastering the content they need to excel. They deserve to be recognised as among the 2021 Champs.