Rynfield resident Helen Barrett, maiden name Liebenberg (65), is a born and bred Benonian who is the head coach at Curro Serengeti based in Kempton.

She is also the general manager for Curro Tennis Gauteng. This is after she retired from professional tennis in 1978 to pursue her career in coaching. 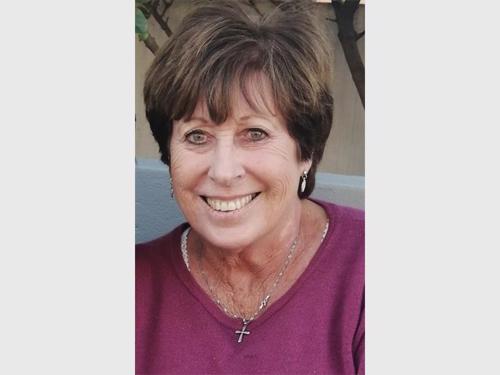 Helen Barrett is a born and bred Benonian who is the head coach at Curro Serengeti based in Kempton.

“I started playing tennis from the age of four and loved the sport,” she said.

“My parents played at Northmead Tennis Club and I used to spend hours on my own hitting against the wall.”

“I had my very first tennis lesson with Russell at the age of six and started playing tournaments at the age of eight,” she said.

“I won a number of tournaments including Eastern and Southern Transvaal u-12 and today I have coached many top juniors.” 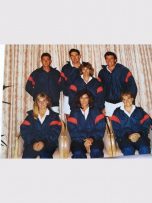 The Eastern Transvaal provincial team back when Barrett played professionally. She can be seen in the middle front. 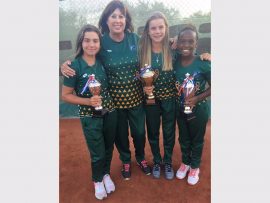 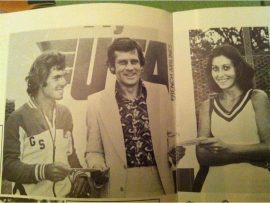 A fond memory for Helen Barrett was when she won the South African u-21 tournament. Here she is seen with the men's winner Graham Silverman (left) and the sponsor of the tournament in the middle.

Barrett attended the Benoni Convent (St Columbus) until Standard Six (Grade Eight) and then attended St Dominic’s Catholic School for Girls in Boksburg where she matriculated in 1973.

“Tennis was and still is my passion. I never missed a day of my life playing when I was young,” she said.

“I think maybe one of my greatest achievements was winning the South African grass court championships. The prize was a ticket to compete overseas on the tour in Europe, where I started playing in 1975."

“Playing on the tour was the most amazing but humbling experience. I had to learn to be tough, live out of suitcases, and play qualifying events. I struggled financially as my parents did not have money to support me and I had to rely on winning matches to survive.”

Barrett also played at Wimbledon, The French (Roland Garros) and The Italian Open as well as many of the tournaments in England and Europe between the years of 1975 to 1977.

“During this time I achieved a world ranking of 138,” she explained.

Other great achievements that Barrett looks back fondly on are reaching the finals of the South African closed with wins over Brigitte Cuypers (who reached the final of the South African Championships singles on five consecutive occasions, winning the title in 1976, 1978 and 1979) and Tanya Harford (in 1981 she won the doubles title at the French Open) in 1976.

“I also fondly remember my wins of the Northmead Tennis Club Championships for 14 years when I was 12. I still hold the record at Northmead for the most singles titles won in both ladies and men’s events,” she said.

“I was also the youngest player to represent the province, Eastern Transvaal (now Gauteng East), in the inter-provincial senior team when I was 12 years old.”

Barrett went on to win the Eastern Transvaal singles title over the next 10 years.

“I represented the province on 26 occasions at the inter-provincial tournament and this is also a record,” she further explained.

This driven record holder went from being a player to teaching the game and says that coaching is her new love for the sport, although she does still enjoy playing every now and then at a less serious level.

“I have been involved with coaching tennis for the past 40 years, coaching teams such as the South African juniors from 2012 to 2016, where they represented the country in the African Junior Championships in Algeria, Zimbabwe and Tunisia,” she said.

“I also coached the u-13 South African team from 2008 to 2012 where they represented the country in France.

“I have also been involved in coaches education with Tennis South Africa and the International Tennis Federation. I was an examiner from 2010 to 2014.”

Barrett would love to see more people play, in her opinion, this amazing game, because she believed it’s a sport you can play well into your eighties.

“Although I have not competed since I stopped professionally, I played a few times over the years and represented Gauteng East in the veterans inter-provincial veterans event,” she explained.

“I prefer to spend my time teaching others and in administration. I really love tennis and sport in general as I am also a keen golfer and bowler.”