The riders were selected to represent Gauteng at the Sanesa Schools National Championships held on October 3, 8 and 9 in Fourways Riding Centre and Kyalami Park Club.

“On 3 October 2021, Hannah Boulle and Gunner competed at the Stadium Eventing Nationals at Fourways Riding Centre where they earned a first and sixth place in the 75cm classes. On October 8, 2021, Bayley Evertse and Callaho Liberace won both the Junior Prelim dressage tests 3 and 4,” she said.

Markgraaff added, “On October 9, 2021, Megan Schneeberger and Pearl competed in Kyalami Park Club had one refusal in the jumping 1m two-phase class to end on four penalties. Bayley ended in fourth place for the jumping 1m competition class after a superb jump off. Jaymie Meyer and Laprix competed in the jumping 1.10 classes. They knocked one pole in the competition class to end on four penalties, but went on to earn eighth place in the two-phase class,” she added. 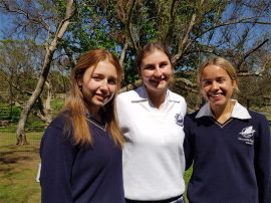