Cricket Namibia (CN), at its annual awards ceremony held in the capital over the weekend, recognised and awarded the country’s top performers and various outstanding administrators. 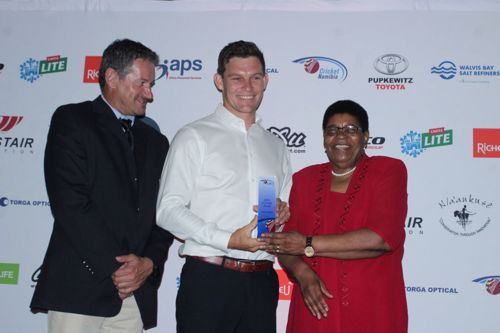 Another category, which was included at this year’s award ceremony, was the top Over 50 Batsman and the Top over 50 Bowler, which award cricketers above age 40 and older.

Mathew de Gouveia, who scored 70 runs for his club BA Blasting against Imperial Lions Cubs last year, walked away with the U/19 Player of the Year accolade, while Albert Mwembe took home the Youth Coach of the Year award.

Narraville Primary School was awarded as the Kwata School of the Year. Yasmeen Khan was awarded best batswoman for 2019/20, while Saima Tuhadeleni received the award for women’s best bowler for 2019/20.

The over 50 award went to Gavin Murgatroyd for top batsman, while Dee Thakur won the top bowler award, and Alexander Volscenk was named the winner for franchise award.

The rest of the winners are as follows

Umpire of the year

Most improved umpire of the year

Administrator of the Year

Spirit of Cricket Award (a team with outstanding performance)

Coach of the Year Award